Colombia is blessed with an abundance of rivers and valleys ideal for large scale hydroelectric power. This power source is relatively inexpensive per kW-h and can provide clean, renewable energy. As such, a large share of Colombia’s installed power generation capacity comes in the form of large-scale hydroelectric power plants, accounting for around two thirds of all power generating potential in the country.

While relying on hydroelectric power at this scale has many benefits ­– namely that power is produced pollutant free while prices are maintained at a low level – it comes with a downside: it is particularly susceptible to prolonged droughts.

In contrast to other parts of Central and South America where the El Niño-Southern Oscillation produces wetter climates, an El Niño phenomenon in Colombia produces a much drier climate. Thus, strong or extreme occurrences of El Niño have the potential to disrupt power generation as rivers dry up and dams use up their “fuel” reserves. For instance, the El Niño phenomenon of 1992/1993 was particularly severe and a policy of power rationing was introduced to save resources, thus scheduled power cuts of several hours were introduced around the country to prevent massive power outages. Also, the country moved the time zone forward by an hour in an effort to save electricity, which was known as Gaviria Hour, after the then president.

To combat this, the government in the mid-1990s put in place policies to encourage the development of power plants using other sources of generation and which can be turned on and off. This policy is called Reliability Charge and is a system that consists of energy projects guaranteeing a certain level of energy production (the system calls this firm energy) in exchange for a monthly payment which is transferred to users. Due to the nature of this system, there are power plants which have been awarded firm energy commitments yet rarely produce energy. For example, there have been only a handful of days in the past couple of years when firm energy guarantees have been called upon.

This system has proven successful in diversifying the country’s power sources. However, it has had the impact of encouraging the development of fuel-oil plants and others that have a negative impact on the environment, as these too can be turned on and off relatively quickly.

This system could be further developed using solar power.

Solar has the potential to hedge against hydro’s meteorological risk; when an El Niño phenomenon threatens hydroelectric generation potential, solar energy is most productive.

Yet the question is how much solar power would be required to be installed to replace the thermal power plants and, is there enough land?

According to XM (the administrator of Colombia’s energy exchange market), 5,280MW out of the total 17,462MW power generation capacity is thermal energy, both large scale and small. This equates to 46.2 TW-h per year, or 126.7 GW-h per day. A solar plant using photovoltaic panels in the tropics requires roughly 1.2ha per MW of installed capacity when accounting for losses in transmission. At an average of 4 hours of sunshine per day, an approximate 380km2 of land would be required, roughly the size of Bogota, the country’s capital. However, there are areas in the country, such as the northern Guajira peninsula which receive an average of 7 hours of sunshine per day. If all the capacity were to be installed there, around 220 km2 would be required. This is roughly equivalent to the total surface area encompassed by the reservoirs feeding the countries main hydroelectric plants. 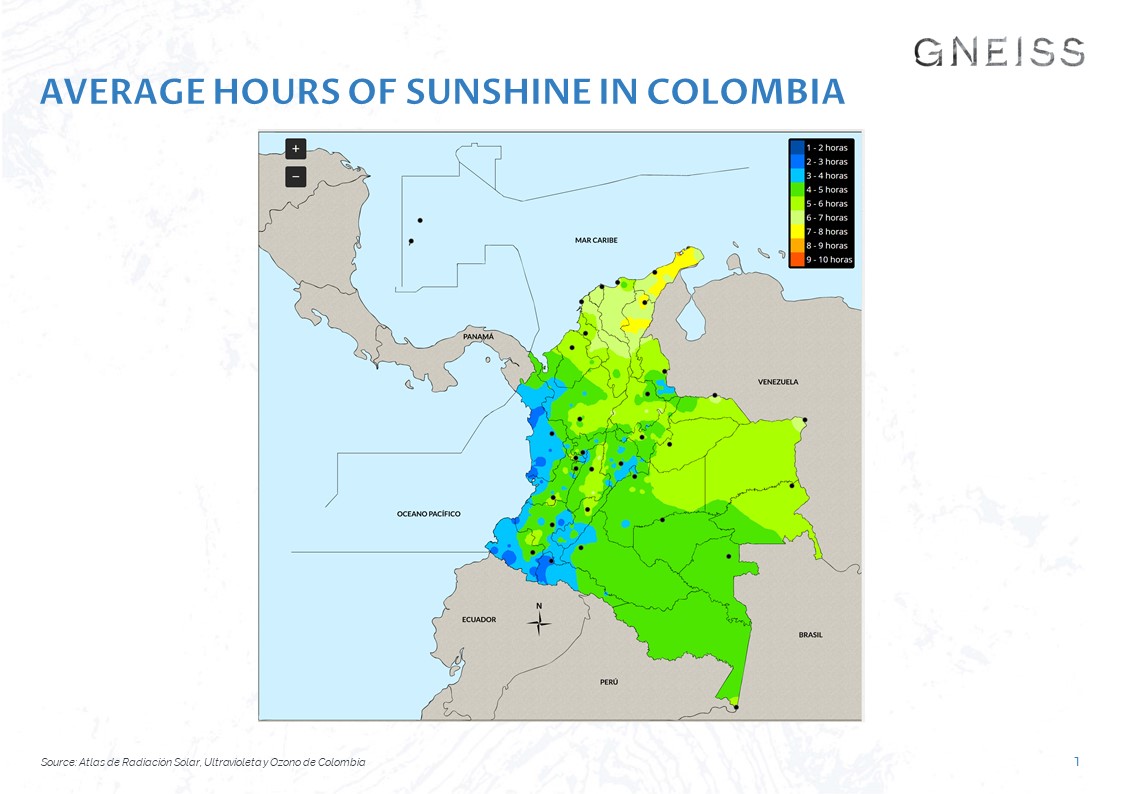 While replacing the entirety of the country’s thermal generation capacity is a big undertaking, it is nevertheless becoming more of a possibility as the costs per kW-h of photovoltaic solar energy continue to fall. 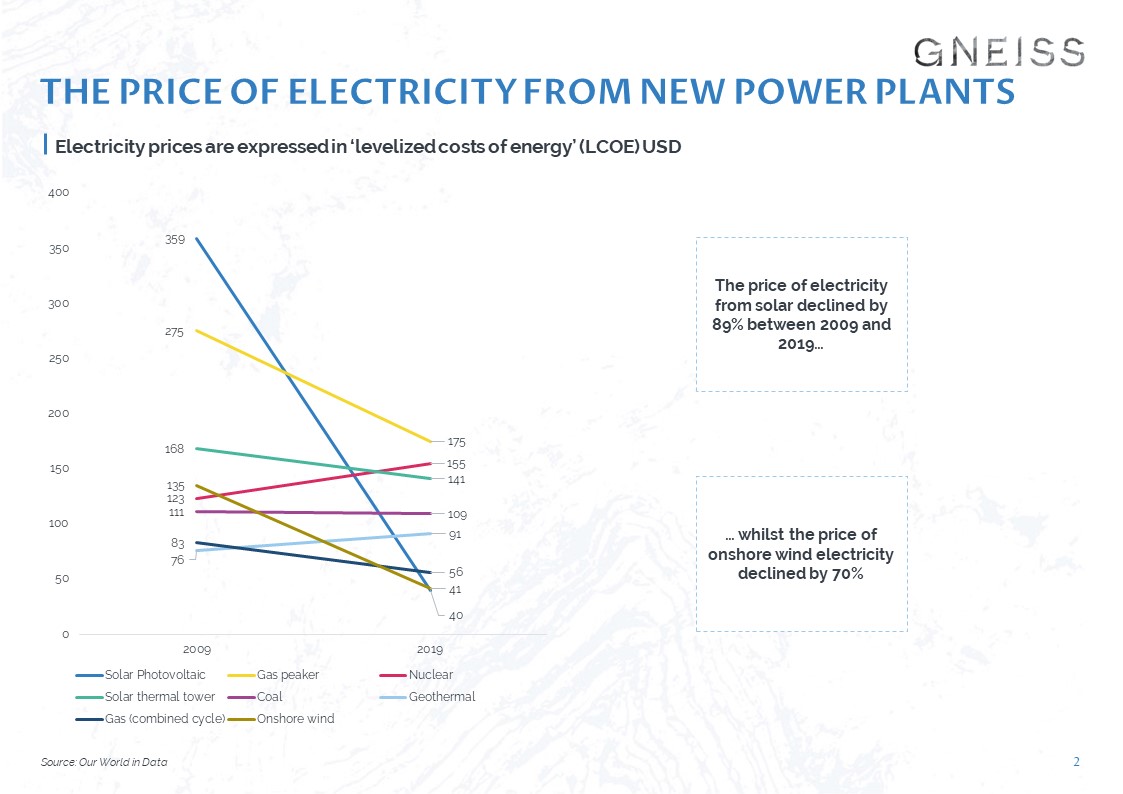 At Gneiss Energy we are committed to assisting our clients in protecting and improving the reliability and the flow of energy as this truly is what powers all aspects of modern life. We believe that solar energy has fantastic potential and can have empowering effect that allows for the harnessing of long-term growth in countries like Colombia.

Victor is an investment banker with 10 years of corporate finance experience across the power, oil & gas and mining sectors in Latin America, North America and Asia. Prior to joining Gneiss Energy, he was founder and managing partner of private equity fund and investment bank, Tyto Capital Group, supporting clients across Colombia and Peru. During this time, Victor also worked with fintech and marketplace startups in Latin America, the US and South East Asia. He began his career as an Associate at Colombian investment bank, Valfinanzas, where he focused on M&A and corporate finance consulting, predominantly covering the midstream and upstream sectors as well as mining and power generation. Victor also serves as a board member of Aviatur, a leading Colombian corporate group with over 4,000 employees and 21 portfolio companies in the travel and tourism sector that has expanded into hospitality, logistics, insurance and tele-medicine. Victor holds an MBA from MIT Sloan School of Management with a certificate in Entrepreneurship and Innovation and a Bachelor in Economics from Universidad de los Andes. 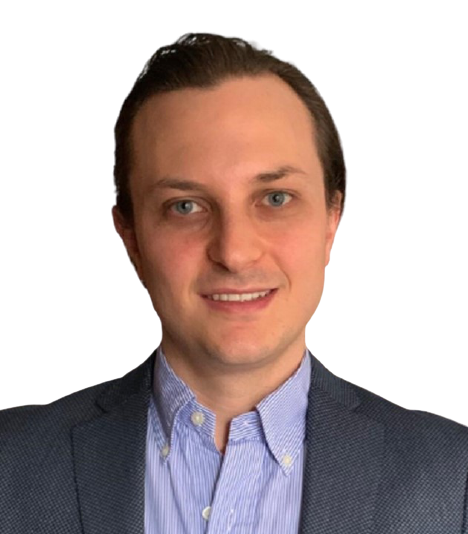