Much has been written about the role of hydrogen (H2) to decarbonise parts of the energy sector currently supplied by traditional hydrocarbons. In a global economy dominated by fossil fuels, there is intense debate as to how we decarbonise energy demand vectors including power, heating, industrial processes and mobility. We have already witnessed the success of renewable power systems displacing coal and reducing gas fired power capacity globally. However, these relatively simple wins cannot be relied upon to achieve net zero.

It is easy to see why H2 is touted as a solution to the carbon emissions dilemma through its ability to be transported by ship and pipe to a multitude of end users including transport, heating, specialist chemicals and industrial heat processes. This represents an ideal market for incumbent oil and gas companies to service this market through well understood steam methane reforming (SMR) techniques and adopting carbon capture and storage (CCS) to mitigate for the emissions costs.

In this article we establish the first adopter markets for H2 and the implications for green H2 to be the dominant supplier combined with pricing competition from electrification.

Electrification and H2 will likely account for around 90% of global energy demand by 2050. The question is, how much of this market demand will be serviced by H2? According to the Hydrogen Council, by 2050 transportation, industrial and commercial heat will be the dominant markets for H2 demand (shown in Figure 1). The assumption that 25% of passenger cars are expected to be fuel cell vehicles looks to be very ambitious relative to the number of major car companies launching fuel cell vehicles combined with technical and economic complexities for this technology to take meaningful market share from lower cost battery electric systems.

It is probable the role for H2 in the power sector is relatively small and confined to off and weak grids. As the cost of renewable power undercuts fossil thermal equivalent across global markets, it is inevitable the increased levels of intermittency will raise the cost of balancing the grid. To fully decarbonise the grid there is uncertainty in the most cost-effective method to balance increased intermittent renewable power. Possible solutions may involve the combination of pumped hydro, distributed thermal stores (heat batteries), electric vehicles (EVs), inter-connectors and time shifting stationary batteries working in concert through smart metering systems. However, the extent of H2’s role in balancing power grids is thwart with technical and economic inefficiencies which leave it exposed to lower cost alternatives. 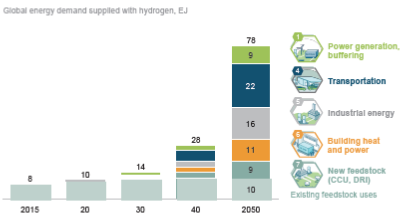 In my view, H2’s role will be constrained to high temperature processes which cannot otherwise be electrified. This includes steel, glass, cement and fertilizer production. H2 is already a vital part of the global economic environment and plays a significant role in feeding global population growth. The H2 market could witness the same tensions evident in the food versus fuel debate played out over the early part of the 2000’s where corn and soy were used to make biodiesel and ethanol (respectively) in place of food production.

Inelastic food consumption will play a significant source of ongoing H2 demand in the years ahead which is likely to command a premium to the power, heating and transport sectors. In Chart 1, we show the aggressive market demand for pure H2 (17% compound average growth).

H2 production represents 3% of global greenhouse gas emissions (GHG) for the purpose of either de-sulphuring natural gas or more importantly for the production of fertilizers (in addition to methanol and explosives for mining). Global food production is largely dependent upon high carbon intensity steam methane reforming (SMR) to produce H2 which is then combined with nitrogen to produce ammonia. Natural gas fed SMR generates 1 tonne of H2 with 9 – 12 tonnes of carbon dioxide as a by-product. Due to population growth (additional 3 billion people by 2050) demand for ammonia is projected to double by 2050[1]. Around 60% of global fertiliser supply[2] (remainder derived from potash and phosphoric acid) is reliant upon high carbon intensity hydrogen.

In Chart 2, we opine upon green ammonia production costs with the benefit of learning rates and repeat deployment. In January 2021, NEL ASA (leading alkaline and PEM supplier) confirmed that economies of scale through ramping up capacity is expected to produce renewable H2 at £1.08 (assumes power costs of £14.4MWh at 30 bar pressure). The implied cost of ammonia (NH3) through the haber bosch process would result in a price of circa £400/tNh3 which is well within the current range of natural gas fed equivalent processes.

Importantly, using the same natural gas prices shown in Chart 2, the current cost of hydrogen from unabated natural gas SMR is in the region of £1.30/kg to £0.72/kg. The range of natural gas prices represent markets from high cost LNG markets in Asia compared with low cost US natural gas markets. We therefore envisage a scenario where the current process for H2 production using natural gas as a feedstock will be uneconomic in many markets by the end of the current decade. This will also place considerable constraints in the future development of higher cost blue H2 production. The viability of long term project financing for blue H2 will become increasingly difficult to arrange if when green H2 is expected to undercut unabated processes by 2025.

The announcement from NEL has taken the sector by surprise as water electrolysis powered by renewables is characterised by a low rate of deployment (currently less than 140MW of annual deployment historically). It remains to be seen if the other electrolyser suppliers can match the forecast cost reduction anticipated by NEL. If so, we envisage the market opportunity for blue H2 to be significantly constrained and short lived.

In my view, the initial focus for incumbent H2 production will be the decarbonisation of ammonia for supply to the fertiliser market. Food consumption will command premium pricing relative to the power sector. There is very little evidence of substitute products to displace H2 for fertilizer at significant scale. Consequently, devoid of lower cost alternatives, ammonia for food production should outbid the price for electricity supply balancing or space heating requirements.

Despite this uncertainty, the role for the H2 molecule is more positive in areas of the economy which are technically hard to decarbonise with purely electric based systems powered by renewables. Industrial heat processes represent around a fifth of global greenhouse gas emissions (Chart 3) from the onsite combustion of fossil fuels. Removal of these emissions is essential for 2050 net zero targets to be met.

Within the industrial heat sector, steel and cement require the highest temperatures for finished products. Food, paper and aluminium demand lower temperatures in order to generate the required chemical catalyst. Therefore, it is possible to install electric arc furnaces in place of fossil fuel fed systems for these sub-sectors while also side-stepping thermodynamic processes evident in water electrolysis hydrogen production.

Virgin steel production from coking coal fed blast furnaces is approximately half the cost of steel production using renewable powered hydrogen plant (assuming like for like new build in both systems). As a feedstock coking coal has remained cheap relative to using natural gas. However, as governments encourage the development of net zero economic activities, they will no longer allocate free carbon emission certificates. It is therefore likely that CCS enabled steel production will be undercut by green H2 feedstock. Although green H2 to can be expected to play a dominant feedstock role in primary steel production it will be restricted by steel re-cycling (circa 30% of current market supply) which can be reformed through an electric arc furnace (witness GFG Alliance $2.0 billion investment in electric arc furnaces). Additionally, high heat values can be derived from biomethane and biomass which could take limited market share from green H2.

To date, there is very little evidence of traded or transported liquified H2 (reflecting onsite fossil fuel SMR process). It is probable this market dynamic will remain for a number of decades. Fenced H2 production for dedicated supply in key industrial heat sectors lends itself to cost efficiencies which rely upon local production. We therefore expect sector coupling and co-location to be the norm for green H2 feedstock and end use in most markets. Land constrained markets without sufficient renewable resources (e.g. Japan) may need to rely on international trade of H2 or resort to nuclear powered water electrolysis.

Despite the high profile coverage for H2’s to deliver the energy transition its market opportunity will be limited to fertiliser production and high temperatures process which cannot otherwise be electrified.

David is a senior corporate finance professional with 23 years’ experience in equity, debt and structured finance transactions and with a focus on renewable energy infrastructure and cleantech businesses since 1998. David previously worked at Wood Plc as an Investment Manager providing renewable energy transactional advisory services to debt and equity investors including both buy and sell side mandates ranging from utilities, IPPs, corporates, institutional funds and banks. Prior to Wood Plc David was a number 1 Extel Rated equity analyst with 23 years’ experience in the fields of investment banking and research. His sector coverage spans renewable energy infrastructure, environmental technologies, mobility, energy efficiency/storage, hydrogen generation and electricity price forecasting. David has originated and executed seven IPOs on the London stock exchange in addition to numerous private placements in the cleantech and renewable energy industry. 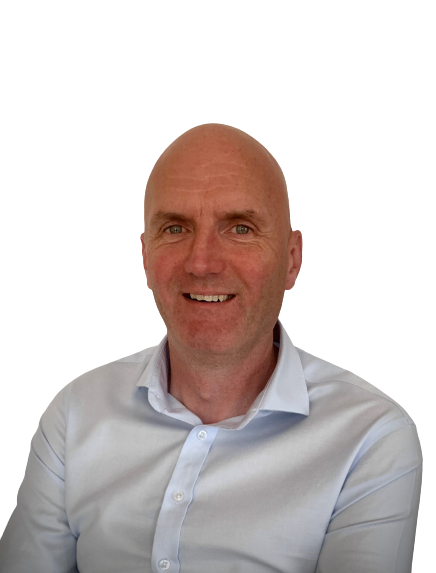